Field excursion to the Scottish Highlands

A pre-conference fieldtrip organised for SGA 2019 in Glasgow. During this fieldtrip we visited ancient Pb-Zn working and Scotgold's active gold mine near Tyndrum.

To launch the SGA Students and Young Scientist Chapter for the UK and to celebrate the SGA conference coming to ‘home turf’, the chapter organised a one-day field trip to the Scottish Highlands prior to SGA2019.

Led by Lewis Banks and Jo Miles, this trip took ten SGA members from across Europe and North Africa to visit an ancient mine and workings for the Pb-Zn deposits found near Tyndrum and to a modern Au deposit, about to commence production. 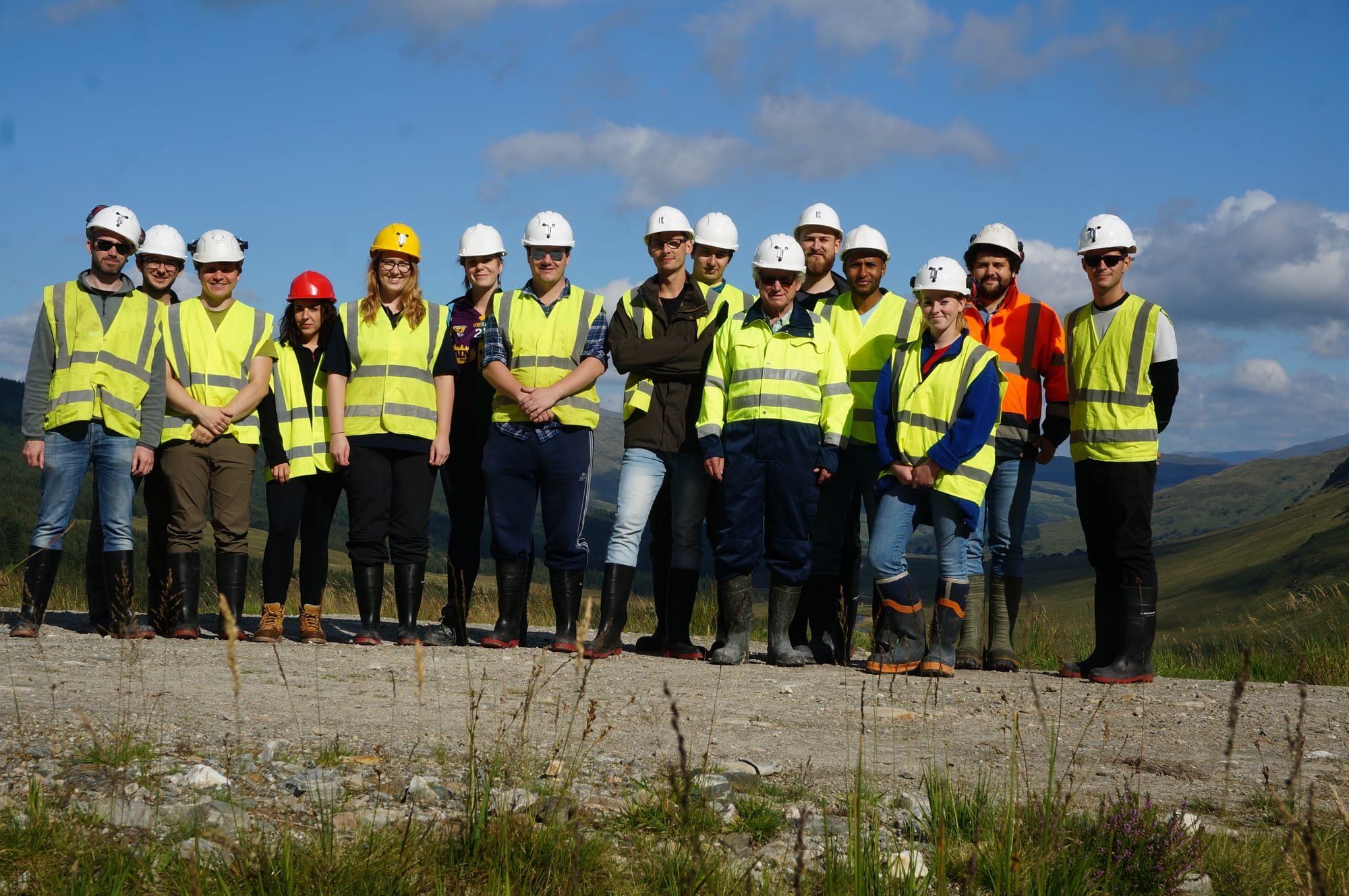 Discovered in the early 15th century and forgotten until rediscovery in the early 1700s, the lead-zinc workings at Tyndrum struggled due to its extreme remoteness. During the 18th and 19th centuries, ore often took five weeks to reach Glasgow by a combination of horse and carriage and boat - a journey of only 1.5 hours by car today! Completion of the railway in 1873 connecting Glasgow to Tyndrum meant faster transportation of both processed ore and supplies for the miners who often had travelled from afar. Lack of fresh water during harsh winters and the now-ancient workings demand on peat supplies for fuel, limited mining to warmer, drier months of the year.

Many companies and individuals struggled to make any profit from the now-ancient workings resulting in the lease of the mine being transferred many times throughout its history, with a brief abandonment in the 1790s. One such lease actually included a £200 gown for the wife of the local landowner. These frequent lease changes led to fluctuations in the mine’s output, with the annual production of Pb decreasing through its life, as Pb ore dwindled in both quantity and quality. Other metals, including small amounts of Ag, began production in 1857. However by the 1870s, most of the easily accessible ore had been mined and tailings were reworked during and shortly after World War I. Lead bars were exported as far away as Russia. Mining and processing ceased production by 1928, leaving a historic landscape similar to the present day.

The ore-bearing vein runs NE-SW and truncates against the late Caledonian sinistral strike-slip Tyndrum-Gren-Fyne fault that is thought to provide the pathway for the high-temperature fluids delivering the metals. These fluids rose under very high pressure and at a high velocity, hence mineralisation is not simple. This resulted in spectacular hand specimens of mineralised Pb-Zn-Cu quartz veins, easily found in the terraced tailings heaps surrounding the old workings.

We spent the morning exploring the tailings heaps and collecting specimens of the local mineralisation.

After a brief introduction to the deposit and regional geology by our host and one of their geologists, Charlie King, we examined a recent core and were given an insight into a day in the life of a geologist. This was followed by a short drive to the mine adit for the underground tours to commence.

Underground, we were introduced to the local mineralisation of the Dalradian Supergroup and were shown the different types of mineralisation and evidence for tectonic activity in the area. The mining engineer, Stanley Lister, told us how they were going to extend the adit to reach the ore and how the extraction and stoping of the deposit was going to be undertaken. The various methods of stabilising the adit and adit walls were described, as was the method by which the blasting of the rocks was achieved.

We were also shown surface outcrops of Au-bearing quartz veins in-situ. Viewing the surrounding landscape, Charlie showed us the regional setting of the deposit and the mother vein - the large, mostly barren, quartz vein believed to be a splay from the Tyndrum fault. We discussed the challenges of collecting core and doing fieldwork in remote and peatdominated terrains.

After a fantastic day-trip to the Scottish Highlands, we headed back to Glasgow in time for the Ice Breaker of SGA2019!

We would like to thank Scotgold for both, their time and effort in hosting us for the afternoon and SGA for the funding to allow this trip to go ahead.